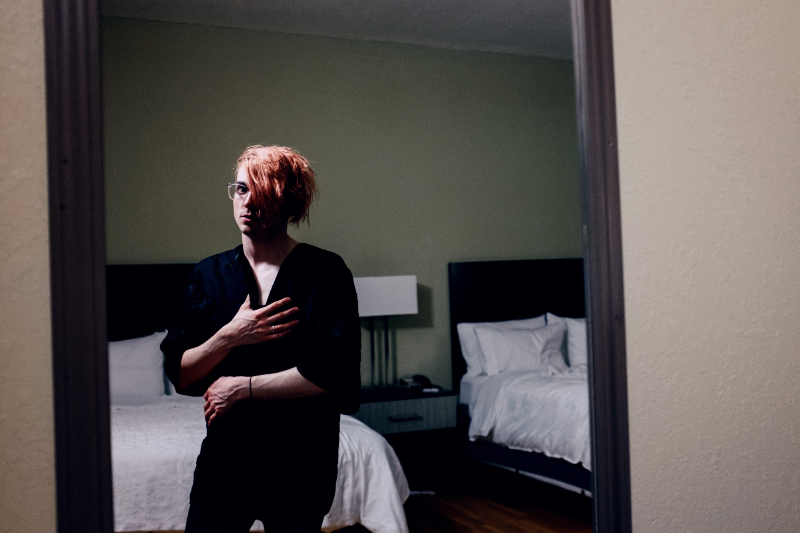 Philadelphia-based experimental electronic artist Ricky Eat Acid shares When They Align Just So, Memories Of Another Life Bleed Into My Own.

Do you know that feeling you get when hearing certain music for the first time – it’s sort of like nostalgia for something you can’t actually remember, or didn’t actually happen. Lately, it’s been happening to me with the Ernest Hood album Neighborhoods so strongly I almost feel myself ‘living a thousand different lives, to completion, in the blink of an eye, and forgetting them again like dead dreams brushed from tired eyes in the morning light’ to quote a long time favorite writer. I don’t really have a better way to describe it, but it comes up a lot in the blank static void of other people’s lives on the internet. You’ll see it a lot in Youtube comments, on old flash videos, really anywhere you turn if you look under the proverbial logs in the online forest, beneath the leaves on the forest floor, where the salamanders live. When I was a kid, I got the same sort of feeling when playing certain videogames – Earthbound, Chrono Trigger, Secret of Mana, Majora’s Mask, and so on – it was like the kind of “Wanderlust feeling” that’d come from reading certain books, watching certain movies, but for somewhere that wasn’t real, and couldn’t actually be accessed, except maybe in dreams I suppose.

I’ve been very preoccupied, the last few years, with the idea of memory, and false memories especially – how easy it is to convince someone they experienced something that never actually happened. Honestly, how easy it is to convince ourselves we experienced things that never happened. I would practice, sometimes, as a kid even, telling myself to “remember” something wrong – that is, I’d tell myself over & over an innocuous lie was the truth, things like “I ate three oranges for lunch today” when I’d really had a sandwich, just to see if, as time passed, I’d remember the lie as the truth. I kept track in a notebook, where I’d record each to remind myself of what was objectively real. Then I lost the book, and I forgot both versions in time anyway – the lie & the truth – so that it didn’t matter anyway ultimately.

I still remember the first time I really, truly realized what time was – or how we perceive it & what it represents to us, anyway. I don’t know how old I was, but I couldn’t be more than five years old. It was close to the fourth of July & I was eating watermelon at the kitchen table, with the window open across from me letting a breeze blow through the hot room. I had a little bowl to spit the seeds into, but I preferred to take a spoon & try to poke them out of each slice, one by one, before eating it, so that I wouldn’t accidentally swallow one and let it grow inside me (as I’d been told, and still at least half-believed). It occurred to me suddenly that soon this moment would be gone, and I’d be somewhere else, doing something else, and soon enough I wouldn’t even remember it, though it was undoubtedly happening – and if I no longer remembered it, even though it happened, would it really have ever happened at all? I worried that everything I remembered before that moment could be a lie, even though I could remember so much of it, there was no way to prove that it really actually happened, once it was gone. (Coincidentally, the first “R Rated Movie” I’d watch, just a couple years later, would be the director’s cut of Blade Runner.) I decided to commit every detail of the moment to memory, to see if I could ‘hold on’ to it, so to speak – I don’t think I thought I could move about freely through time like Billy Pilgrim, but I was still curious what would happen if I managed to ‘capture’ it in my mind well enough to return to it, the way it smelled, the feeling of the hot air in our non-air-conditioned house, the sweet taste of the watermelon and the feeling of the few little black seeds well hidden enough that I’d bite down on them still, accidentally. It wasn’t until a few weeks later, in the backseat of our car as we drove across the Chesapeake Bay Bridge, when I remembered my goal again suddenly & began pouring over each detail, trying to see if I could ‘force’ myself back into that moment. I marveled at how much time had passed, but I was disappointed to find I still had no way to prove that my memories, even the watermelon eating, were real – I could remember the taste, the smell, the feeling of the moment with convincing verisimilitude, but there was still nothing tangible – I’d have to take my memory at it’s word, essentially. I don’t remember much from my childhood (they say trauma will do that) but I can still recall that moment in the kitchen with the same certainty as I did then.

How does it relate to this record? Not perfectly, that’s for sure – but isn’t that the point of art?

I began writing this record in 2015, when I had a tentative job lined up to compose the music for a new indie game that was being developed. The details aren’t important, nor mine to share, but it was something very much in line with the retro JRPG/SNES sensibilities & art styles of subsequent games like Undertale and Stardew Valley, among others. Considering that the music of games like Final Fantasy 6, Earthbound, Chrono Trigger, Secret of Mana, Super Mario RPG, Paper Mario, Banjo Kazooie, Majora’s Mask, Mother III, (and so on) was what first inspired me to begin learning about music, music theory, and how to compose it, this was perfect for me, and I happily over-committed myself to the project, so much that when the game itself ended up cancelled, I continued to work on the soundtrack anyway, just for fun. Luckily, I was allowed to keep the work I’d done and use it for anything I wanted, as long as I scraped any trace of their IP from it (in the titles, and so on – hence my intentional & caution vagueness in talking about any of it)

I became very interested in how I could make a proper album from it all, and what it might be like, what it might mean and represent – etc. What stuck out to me as the most interesting facet was the absolute overwhelming nostalgia at the heart of projects like these, whether it’s something seemingly observed and capitalized on simply to sell a project, or out of personal, real love for the style & tropes (seeing as Undertale & Stardew Valley were, famously, both labors of love from a single creator, I’d readily drop both into the latter category). It’s not just that we go back to these touchstones from our childhoods a lot (and a lot more after a certain age, especially) but things that are even vaguely reminiscent of them can still elicit the same knee-jerk emotional response despite not having the actual memories attached to them, or anything like that – like hearing a certain kind of retro synth sound used in other music, or a certain composition style meant to evoke music from those games & composers. Even with my own music as Ricky Eat Acid – which, to be fair, is frequently inspired in various ways by these things, notably in songs like “Inside my house, someplace I keep dreaming about” which I wrote to mimic the opening song that plays when starting a new game in Chrono Trigger – not the composition/style itself but the emotional undercurrent of it – how I felt when listening to this song, with or without the actual memories of the game, so to speak. (Coincidentally, this is by far the most popular song I’ve released, to date.)

So, could an album written specifically in conversation with all of these influences and composers evoke the same sort of emotions from a listener personally familiar with them, despite not having any of the same memories attached to the music? Obviously it would be a slightly different thing altogether, but in a broader sense it gets back to the question of memory, and of the ease with which false memories can slide in alongside (or in place of) our own experiences, sometimes as easily as by an offhand suggestion subsumed into the brain’s pulpy, static ooze. Could an album designed this way also stand alone as a musical project completely separate from its concept, to anyone without any knowledge of its influences or conception – not to mention someone completely oblivious to any of these games and the music that accompanies them, for any reason? The goal, of course, is that it will; I wouldn’t want to release something that required any kind of prerequisite knowledge. At the end of the day, I just wanted to make a good record that I loved a great deal, personally, and everything else could be additional to that. Hopefully you enjoy it for what it is, either way, I don’t have any answer for any of this myself but I think it’s important to give a bit of an explanation for the project, and it’s existence, to anyone who cares & is interested. I know that it’s more pretentious than ever, in this day & age, to talk so much about one’s art, but I also don’t really mind or care – I’ve always loved reading the author’s preface to certain books when it’s written with particular care, in a way that influences the reading and gives greater clarity and context to it (Slapstick, by Kurt Vonnegut, is a particular favorite example of this, and there’s a reason my wife & I share matching tattoos of the campaign slogan logo from it).

There is a lot more I want to say, but you’ve suffered this far, and I thank you for it; to go on beyond this point would be simply cruel. Thank you for listening to this record; it means a great deal to me, and I am incredibly happy to finally share it with you after five long years of writing, re-writing, shuffling & reshuffling it. I want to thank my wife, Kitty, for helping me shape it into the album it became and for helping me find the confidence to finish it and release it – as well as for agreeing to release it through her label, Pretty Wavvy. I know I’m not an easy artist for a label to work with sometimes (though it’s only because I care a great, great deal about the work I do, even when it would benefit me to dial it back and let go some – hah!) so I have to say thank you double for that. I want to thank my other friends who heard it along the way & helped me to form it into the complete, final version you can hear now. I want to thank Jesse Cannon for mastering it and allowing it to sound as good as it does; I can’t even begin to explain how amazing it felt to hear after four & half years spent listening to the original quiet, tape-hiss & static coated draft.